Programming is an intimidating topic to a large number of people. Knowledge of coding makes you a kind of wizard to those who don’t, and it lets you surprise friends and family. The power of technology that people use for their smartphones or tablets has weaved its way into our lives and possessions, and you can access that power. This humble microcontroller board, Arduino, doesn’t look like much, but it can be used for any electronics project you can dream of. There are projects to create breathalyzers, a flamethrowing Jack-O’-Lantern, a secret knock detecting door lock, and an almost infinite number of other uses, both quirky and useful.

The Arduino is simple to program, with an easy-to-understand programming language and the ability to just plug a USB cable into your computer to get started right away. Not only is it easy to learn and use, it blows away its competitors in price. Currently the Arduino UNO Rev3, a base model, is sold for under thirty dollars on their website, with better versions with greater functionality being sold for more. Arduino is also the only open source hardware. Open source means that the hardware (and programming within) can be changed, shared, and used by anyone for no cost. Once you buy your Arduino product, the software that goes with it is downloaded free. Anyone can also take the microcontroller itself and alter it to make it better. This unique creation puts DIY projects of incredible complexity within the reach of the average person’s competence and budget.

Necessity is the Mother of Invention

Arduino has celebrated a decade of use and improvement, having been created in 2005 in Italy as a teaching tool for students. Massimo Banzi, an Italian software architect who was a co-founder of the company, needed a device which could promote interactive design (sometimes known as physical computing), where software met hardware and interacted with the world. It was a small field in 2005, and in order to teach his students the how of the subject he needed a microcontroller. A product called BASIC Stamp, the microcontroller of choice for electronics hobbyists before Arduino, was used as the teaching tool previously. This device had limited computing power, didn’t run on Macs (ubiquitous in the design world) and cost $100 each. Collaborating with talented colleagues and students, the project he called Arduino after the Bar di Re Arduino, a pub from Banzi’s hometown became a hit. Through a designer-friendly language called Processing and a prototyping platform called Wiring, the basis of Arduino was created and spread.

Making Has Never Been So Easy 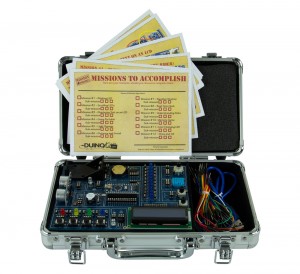 The DuinoKit Jr. is one of many Arduino-based kits to aid in learning computer programming techniques.

Through internet word-of-mouth this platform has grown in popularity nearly unabated. The amount of Google searches from August 2015 to September 2015 for Arduino are almost twice as many in a given month in 2013, and 10 times as many as in 2009. As such, many retailers are now selling Arduino-based projects, robots and devices to do cool things. When you buy a simple Arduino microcontroller, you still need to have electronics to connect to it! Kits, such as our DuinoKit Jr., take the small hassles still involved, the need to find wire and components to make the connections, and put it all in one comprehensive and inexpensive package. These kits contain project ideas along with things like LEDs, buzzers, temperature sensors and much, much more. Don’t limit yourself to just what you find online or in a kit. The coolness of Arduino is that anything you can think of based on connecting one thing to another can probably be done. You’re only limited by your imagination.