One’s first encounter with the Milky Way Galaxy Star Crystal may leave almost as much wonder as seeing NASA’s images of the galaxy itself; a bright, swirling mass of tiny bright dots hovering in a vacuum, or in this case a block of solid crystal. 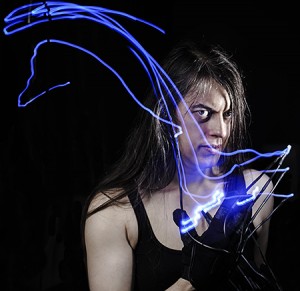 California artist Bathsheba Grossman has made a career for herself by creating a powerful marriage of art and science in her pieces; often utilizing construction techniques such as 3D printing to create intricate geometrical patterns and designs for sculptures, jewelry and other objects. In addition, Bathsheba has been creating brilliant three-dimensional images based on scientific imagery carved into crystal blocks. The images that are etched are referred to as laser-induced-damage images, or LIDI for short.

LIDI is a fascinating process that (as the name implies) cause small breaks in the glass with the use of a laser. The conical laser used is positioned with the proper focal depth to cause a tiny fracture within the crystal structure, leaving the rest of the block around the point of breakage intact. Each fracture, or “point”, measures approximately one tenth of a millimeter in size.

Like most of Bathsheba’s works, the process starts in the design phase. After much trial and error, Bathsheba now uses her own self-written CAD software to create a map of her image. Each “point” is carefully planned out. Several points may exist on one two-dimensional plane of the design. Several more on the next plane, and the next, and so on. Each point must be spaced far enough apart from one another to prevent the crystal from breaking, while being close enough to one another to give the look of the desired three-dimensional line or shape. The particular image of the Milky Way is derived images captured by NASA’s Goddard Space Flight Center.

After the hundreds of thousands of points are laid out in the CAD image, it is time to carve. A high-frequency Nd:YAG laser is used in this process, as a lower-frequency laser will create points that may appear fuzzy when viewed. The laser and crystal block remain stationary during the carving process; a mirror reflects the laser’s beam to properly place the laser’s focus to the correct location in the crystal. Points are created by pulsing the laser on and off once the mirror has been properly repositioned. This process is repeated several hundred thousand times in order to place every point along the structure. The image is carved from the rearmost plane to the frontmost, ensuring that previously carved points do not get in the way of placing new points. The end result is an impressive facsimile of the 300 billion stars in the Milky Way, suspended within the clear crystal structure. 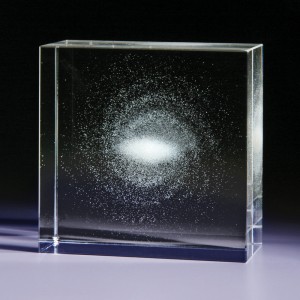 A high-frequency laser was used to carve each individual star.

In addition to the Milky Way, Bathsheba has also created LIDI crystal designs for a map of stars around our solar system, a double helix of DNA, the molecule for caffeine, the Calabi-Yau manifold from string theory and many others.

More of Bathsheba’s incredible work can be seen at her website.