How Well Do You Know the Solar System? (Crossword Puzzle) 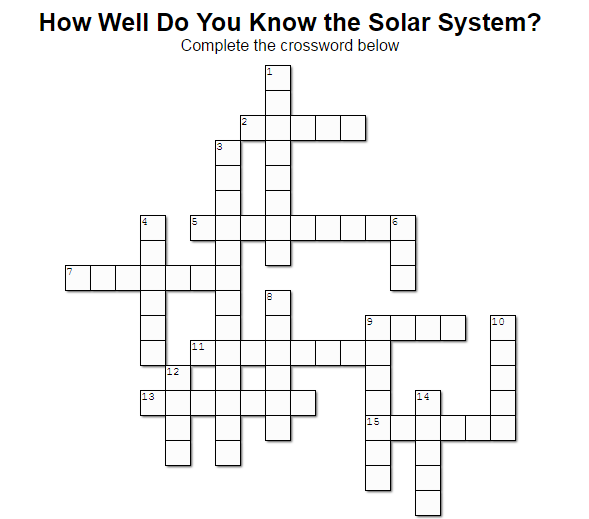 2. This dwarf planet was named for the ancient Roman god of the underworld.

5. These are byproducts of the formation of the solar system, more than 4 billion years ago.

7. Since its discovery in 1846, this planet has made just about three-quarters of one revolution around the Sun.

9. This planet is home to the tallest mountain in the solar system.

11. The largest moon in the Solar System belonging to Jupiter.

13. This planet is so big that twice the mass of the rest of the planets combined would still not equal its mass.

15. This planet has 27 moons that are all named after William Shakespeare and Alexander Pope characters.

1. There are more than 100 billion of these in the Universe.

3. A group of stars forming a recognizable pattern that is traditionally named after its apparent form or identified with a myth.

4. This planet has 150 moons and smaller moonlets. It is also made mostly of hydrogen.
6. The largest object in our solar system.

8. Aside from helium and hydrogen this is the most common element on the Sun.

9. This planet does not have any moons or rings. Also one day on this planet is equivalent to 176 Earth days.

10. This planet has the longest day.

14. The densest planet in the Solar System.