Showing the World the Beauty of Space

Human beings have looked up into the night sky wondering what was up there since the very beginning. Stars and planets have captivated our imaginations, and seeing them through expertly designed telescopes for the complex objects they are has pushed the need for more. The atmosphere we live in obscures how the universe around us really looks, and images taken from space would show things impossible to see otherwise. Since its launch in 1990, the Hubble Space Telescope has produced breathtaking photographs taken in differing wavelengths of light which have changed our perception of the cosmos. From brilliant nebulae and galaxies to the violent end of stars in supernova, there is so much going on in space at unimaginable scales.

The Long, Difficult Birth of Hubble

The idea of a space telescope had been floating around since shortly after World War II, but it wasn’t until 1971 that it was seriously investigated. After careful research and preparation, a plan was submitted to Congress for approval in 1975 for the Large Space Telescope, costing between $400-500 million. Balking at such a high figure, Congress sent NASA back to the drawing board. A new proposal in 1977 cut the mirror used in the imaging from 3 to 2.4 meters and started a collaboration with the ESRO, the European Space Research Organization, both cutting costs to $200 million and earning Congressional approval. Our Hubble Space Telescope Laser-Etched Cube is based on these new NASA blueprints for the telescope, etched in glass and a great showpiece for a desk. 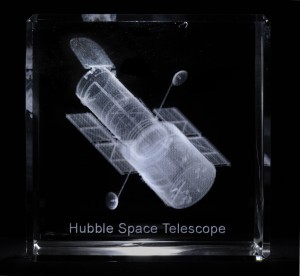 Delays pushed the launch from 1983 to a planned October 1986 launch. During this delay the Large Space Telescope was rechristened the Hubble Space Telescope, after noteworthy astronomer Edwin P. Hubble who first proved the universe was expanding. The Challenger tragedy in January 1986, however, halted all space travel until 1988. Finally, on April 24, 1990 the Hubble Space Telescope launched. The difficulties persisted even after the launch, as a flaw in the main mirror blurred the images taken. This flaw was only 1/50th the size of a human hair, but in space-faring constructions there is no margin for error. It wasn’t until December 1993 that the first repair mission for Hubble fixed this flaw with a system called COSTAR (Corrective Optics Space Telescope Axial Replacement) that compensated with new optics. After this, the amazing clarity of this eye in the sky was revealed.

Astronomers and space enthusiasts were unsure as to what new truths about our galaxy and the universe around us the Hubble Space Telescope would reveal. What most excited them was how these images could reveal how the universe formed. Looking into deep space is like a time machine, due to the unimaginable distances of stars and especially galaxies. The further away the object you view is, the older your snapshot of that object is. With almost no atmosphere to hinder the light and its powerful optics, the HST took a long exposure of seemingly empty space in 1995. What resulted was the remarkable “Hubble Deep Field”, a revelation of over 3,000 galaxies filling the picture, some with their light so young as to not have formed stars yet. In 2004 after four trips for repairs the Hubble took the “Ultra Deep Field” image. This showed even more galaxies at a greater clarity, wowing more than ever.

There are countless publicly available photos of nebulae, planets, and supernova at spectacular picture quality, giving the public a mind-expanding gallery of proof of the vastness of the universe. With the retirement of NASA’s Space Shuttle, further repair missions are over for Hubble. It isn’t known exactly how long the Hubble Space Telescope will last because that depends on NASA funding and when the next crucial piece of it stops functioning, but there is a successor on the way. The James Webb Space Telescope has a planned launch of October 2018, and will both supplement and replace Hubble. Data gathering in tandem is planned until the 25 year old orbital telescope is gently taken through re-orbit and crashed into the ocean. The lasting images the Hubble Space Telescope has produced, along with the appetite for more it’s induced will be its lasting legacy on this terrestrial planet. 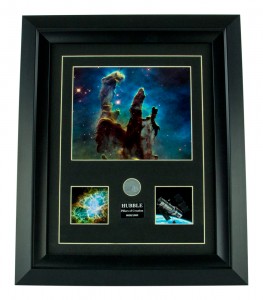