Yesterday, NASA held a press conference to announce some of their recent discoveries. We listened intently as they spoke on how recent discoveries have shown our galaxy, or our former idea of the galaxy, is getting rather crowded. NASA’s Spitzer Space Telescope has revealed the 1st known system of 7 Earth-size planets around a single star! Within these 7 planets, 3 of these planets are located in the habitable zone, which is the “area around the parent star where a rocky planet is most likely to have liquid water”. Let us introduce you to the TRAPPIST-1 exoplanet system.

About 40 light-years (235 trillion miles) from Earth, in the constellation Aquarius, lies a small star named Trappist-1 (an acronym moniker which comes from the name of the Chilean telescope that first began to study it). The Trappist telescope is made to look for planets by watching for portions of their orbit in which they pass in front of their star, causing a tiny but regular dimming in the star.

Early in 2016, the Trappist team discovered 3 planets which prompted these astronomers to call in the big guns! Soon ground-based telescopes in Morocco, Hawaii, South Africa, Spain, and Liverpool were conducting surveys alongside NASA’s Spitzer Space Telescope. The help of these additional astronomers led to the discovery of 4 more planets!

All 7 planets, with the exception of the outermost one, are all closely grouped together and orbit around the Trappist star are within comfortable distance to theoretically sustain biology.

“The planets form a very compact system,” Gillon, a Belgian astronomer, stated during a teleconference prior to the paper’s release. “They are very close to their star and are reminiscent of the system of moons that orbit Jupiter. They could have liquid water and life.” 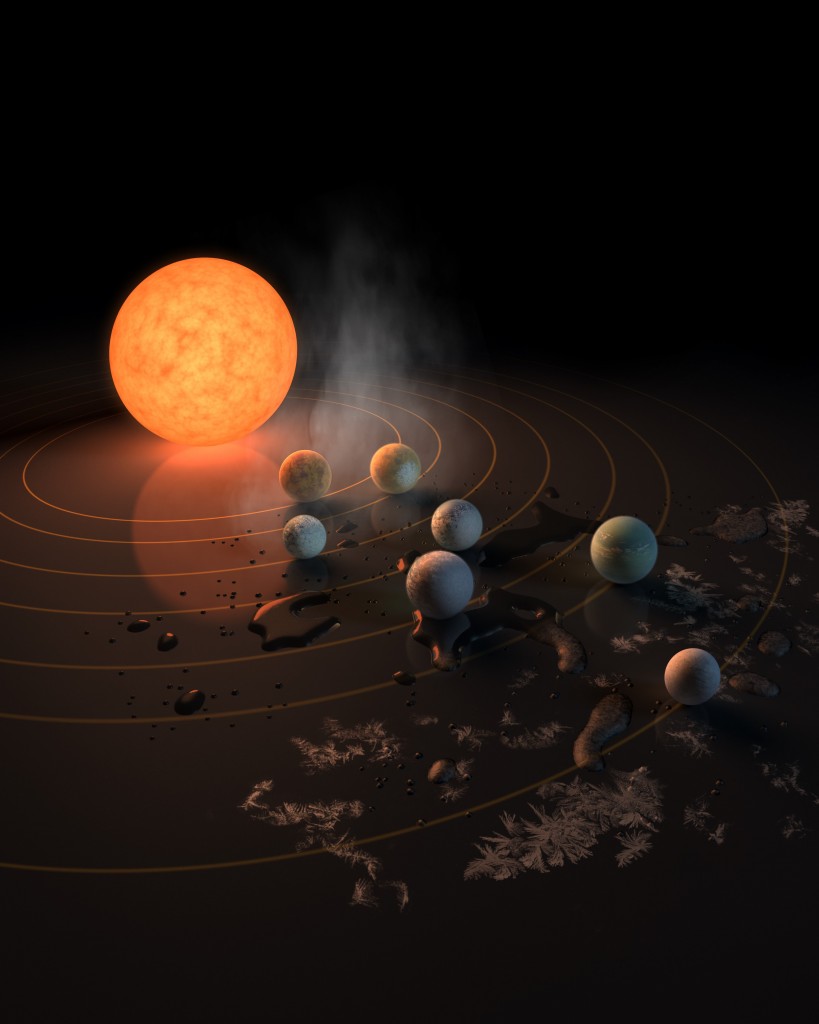 In a solar system such as our own, being so close to the sun wouldn’t be the most ideal living situation given that mercury, for example, has a surface temperature of 800 degrees Fahrenheit.

Trappist-1 isn’t anything like our sun, however! Trappist-1 is classified as a red dwarf, a very small and relatively cool star compared to our sun; just 11% of the radius of our Sun and less than half its temperature.

Unfortunately, we haven’t had any confirmation of extraterrestrial life just yet. But many astronomers have come out to say that if there is any life on these other planets it could be discovered “relatively soon”.

We’re very excited about this amazing discovery and any upcoming announcements regarding the Trappist-1 System.